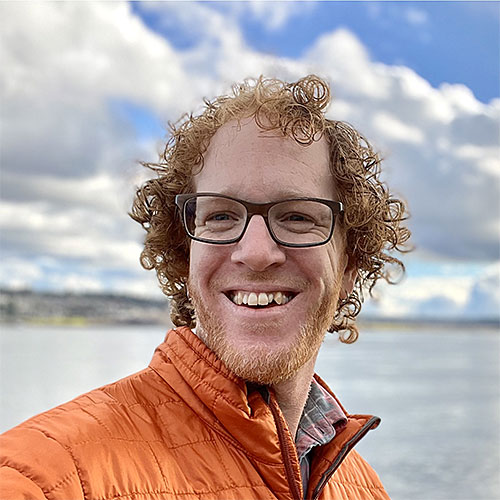 If you’ve got a business, Robby wants to know how it works. Nothing makes him more excited than helping you be more efficient. It’s something he geeks out on at Planet Argon, after all, as the one focused on sales, marketing, driving company culture, and building relationships with clients. An idea generator who’s focused on the end goal, Robby’s always asking, "How does this help our clients’ customers?"

Thinking about tech’s practical uses is something Robby’s been obsessed with ever since he was a teen in Gilroy, California. After dropping out of high school with zero intention of ever working in computers, he taught himself how to program so he could get his music zine online and also sell punk band and political activist stickers. He got the sticker site running, but the profit part not so much. After a string of jobs painting houses, arranging balloon bouquets, and selling software and books, he moved to Portland in 2000. He started out doing tech support for an event management company, and later dove deeper into software development.

In Portland, Robby became heavily involved in both the activist and open source communities. Thus began a freelance era where he helped startups using various open source languages. In the midst of this Robby co-founded Planet Argon, named after a fictional planet that sent away its redheads to Earth in Tom Robbins’ book Still Life With Woodpecker. Then he was introduced to Ruby on Rails in 2004 and his whole world got turned upside down. Planet Argon eventually became one of the first hosting companies to offer Rails support, and he started a popular blog, Robby on Rails. Over the years Robby’s been invited to speak about Rails and entrepreneurship in North America and Europe.

Nowadays, Robby’s best known for creating Oh My Zsh, an open source framework used to personalize (and supercharge) your terminal console. Because of this accidental rise to fame, he’s finally been able to successfully sell stickers online which are now plastered on laptops around the world.

Outside of the studio, Robby spends his time as the board Vice Chair of Portland Homeless Solutions, plays music in an instrumental post-rock band, travels abroad several months a year, takes way too many photos of coffee, recharges on hikes in the woods, thinks up amusing tweets that never get published, and writes and consumes many types of content. He’s especially proud of curating the best Tumblr collection of waterbed commercials from the '80s.